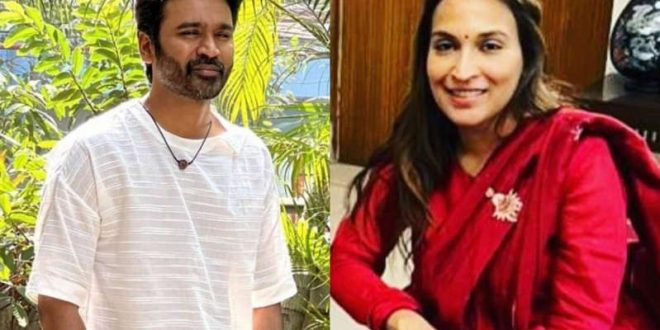 Dhanush Sends Internet into Shock As He Calls Aishwaryaa Rajinikanth ‘My Friend’; See Her Reply

Publisher March 19, 2022 Cinema News Comments Off on Dhanush Sends Internet into Shock As He Calls Aishwaryaa Rajinikanth ‘My Friend’; See Her Reply 193 Views

Dhanush sent fans into overdrive on Thursday as the South star congratulated his estranged wife, filmmaker Aishwaryaa Rajinikanth for her new music video ‘Payani’ on Twitter. Dhanush has been keeping a low profile on social media ever since the former couple announced their separation in January this year.

Aishwaryaa’s music video was unveiled on Thursday in four languages- Hindi, Telugu, Malayalam, and Tamil. Sharing the Tamil link of the video, Dhanush tweeted, “Congrats my friend, @ash_r_dhanush, on your music video. God bless.” In her response to Dhanush’s tweet, Aishwaryaa wrote, “Thank you Dhanush… Godspeed!” This marked Dhanush and Aishwaryaa’s first social media exchange since their split.

However, Dhanush’s tweet left his fans heartbroken as the actor addressed Aishwaryaa as his “friend.” Rumours were rife that the former couple’s families were trying hard to resolve the differences between Aishwaryaa and Dhanush.

Aishwaryaa was recently hospitalised after experiencing severe fever and vertigo. Before that, she was in hospital after being diagnosed with Covid-19.

In January, Aishwaryaa Rajinikanth and Dhanush R Announced their separation. The estranged couple, who had been married for 17 years, issued a joint statement confirming their separation. “Eighteen years of togetherness as friends, couple, as parents and well-wishers to each other. The journey has been of growth, understanding, adjusting, and adapting. Today we stand at a place where our paths separate. (We) have decided to part ways as a couple and take time to understand us as individuals for the better,” their statement read.