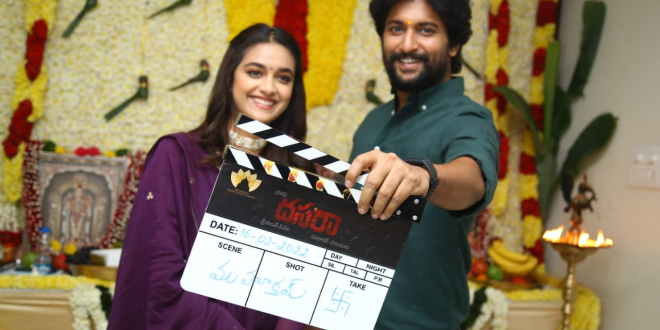 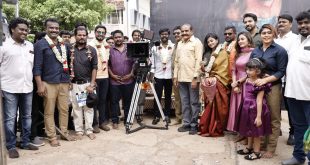 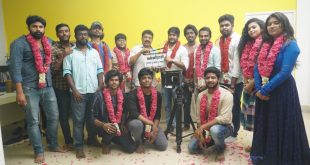 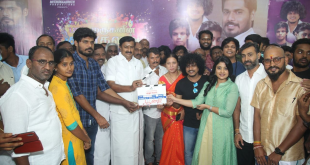 Natural Star Nani started a new journey as an actor as he is doing only different kinds of films that will present him in never-seen-before roles with different characterizations. Riding high with the success of Shyam Singha Roy, Nani teams up with first timer and the very talented Srikanth Odela for a film titled Dasara. Sudhakar Cherukuri will be mounting Dasara prestigiously on lavish budget under his Sri Lakshmi Venkateswara Cinemas with National Award-Winning actress Keerthy Suresh playing the leading lady.

Dasara has been launched grandly today with a Pooja ceremony. Sukumar, Tirumala Kishore, Venu Udugula and Sarath Mandava attended the event as guests. For the muhurtham shot, director Srikanth’s father Chandraiah switched on the camera, Nani and Keerthy Suresh sounded the clapboard. Tirumala Kishore, Sudhakar Cherukuri and Srikanth Odela handed over the film’s script to the team.

Nani plays a mass and action-packed role in a story set in a village situated in Singareni Coal Mines in Godavarikhani. Dasara is an intense drama and the film’s glimpse released for Dasara got tremendous response.

Samuthirakani, Sai Kumar and Zarina Wahab are the important cast of the film that will have music by Santhosh Narayanan with Sathyan Sooryan ISC handling cinematography.

Navin Nooli is the editor and Avinash Kolla is the production designer of the film, while Vijay Chaganti is the Executive Producer. 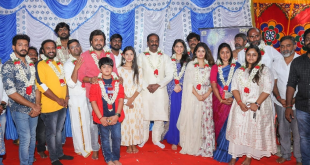