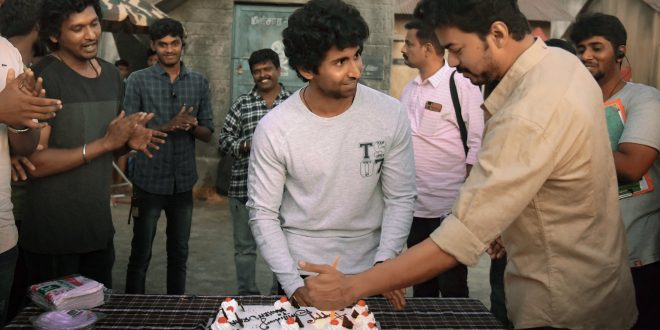 UNSEEN MOMENTS FROM THALAPATHY VIJAY’S MASTER TAKES FANS BY SURPRISE! HAVE A LOOK!

Master Mahendran who delivered a terrific performance in a short role in Thalapathy Vijay‘s Master, is celebrating his birthday today (January 23) and wishes have been pouring in from all quarters for the young actor. As a pleasant surprise, Master Mahendran shared a few throwback pictures on his official Twitter page, recalling the moment when he celebrated his birthday at the sets of Master, two years back. Though Master Mahendran did not have any combination scenes with Vijay, the star actor was present at the shooting spot to celebrate Mahendran’s birthday. Mahendran shared the pictures and expressed his abundant love for Thalapathy Vijay.

In the pictures, we see Vijay and Mahendran sharing a heartwarming camaraderie and this unseen moment from the sets of Master has taken the fans by pleasant surprise. The pictures have already turned viral on social media. Master Mahendran played the role of the younger version of Bhavani, Vijay Sethupathi’s character. The film was directed by Lokesh Kanagaraj who presented Vijay in a different dimension with a sense of freshness. Produced by XB Film Creators, Master had music composed by Anirudh Ravichander whose songs reached big-time among the masses, transcending boundaries. Master also revived the box office in style after the first wave of Covid 19, attracting a large number of audiences to the theatres.

Talking about Master Mahendran, the talented actor will next be seen playing a pivotal role in Dhanush’s Maaran, directed by Karthick Naren. Produced by Sathya Jyothi Films, Maaran will have a direct OTT release on the Disney Hotstar platform in February.

Mahendran will also be seen playing the lead role in upcoming movies like Amigo Garage, Ripupbury, and Karaa, and all three films are in different stages of production. For now, check out the latest trending pictures from Master Mahendran’s birthday celebrations at the sets of Thalapathy Vijay’s Master here: